THERE ARE ADVANTAGES to being old. We seniors can leverage the widespread perception that we’re all poor, incapable of decision-making and inept at using technology.

I have fun with this.

We recently went car shopping. As we left the house, my wife turned and said, “You’re going dressed like that?”

“What’s wrong with the way I look?” I’m in my well-worn jeans, flannel shirt, suspenders and battered baseball cap.

Ah, but that’s the idea. I could sense the initial lack of enthusiasm by the Jaguar salesman. Imagine what he thought when my 80-year-old wife scrutinized the sales agreement and told him we were overcharged by $314.85. They sent us a check.

In the good old days, when my wife and I would go out to eat, we’d occasionally receive the bill with a discount applied. I would delight in asking why the discount. “It’s a senior discount,” I’m told, whereupon I’d ask how the server knows I’m a senior.

Discounts abound for older Americans, all under the assumption we need them without regard to actual income or wealth. I play golf a couple of times a week and receive a reduced fee simply because I’m over age 65. Think about that: I can afford to play golf as often as I want—and yet somebody else is willing to subsidize me.

A senior discount on public transportation is one thing. But on a cruise? Yes, those also exist.

My wife recently had dental surgery. The bill was nearly $3,000, but that’s before a senior discount brought it down to $1,950. Our income is higher than that of the typical oral surgeon.

My favorite senior insult occurs when calling a customer service line. After the representative determines your age, the tone of the conversation changes. Sometimes, I feel like I’m back in first grade, as the teacher slowly repeats each point. On occasion, I make it known they aren’t talking to a child.

If the topic is technology, it gets worse quickly. Give me a break: Yes, I’m watching The Adventures of Ozzie and Harriet—but I’m streaming it via YouTube on my TV or iPad. Okay, an eight-year-old grandson showed me how to do it. But he only had to show me once.

Assumptions about us seniors go beyond our basic cognitive abilities. Didn’t you know all seniors struggle financially? Have you ever heard a politician who didn’t use that broad generalization?

Of course, there are seniors who reach retirement after a life of low income and then find retirement to be even worse. Certainly, many seniors do struggle. But while Social Security is the bulk of retirement income for half of all seniors, that doesn’t mean broad generalizations are appropriate. Overall, Social Security benefits represent about 33% of the income of the elderly.

Such data points rely heavily on surveys. That raises the question of whether respondents are using a uniform definition of income, such as including interest, dividends and various government subsidies. And keep in mind that income is not the same as assets. Based on her income, my elderly aunt applied for and received a freeze on her property taxes. Meanwhile, she owned two houses, as well as a condo in Florida.

Moreover, at least 50% of seniors are no worse off than many younger Americans. In fact, Americans age 65 to 74 have the country’s highest median and average net worth, with even older Americans not far behind. Maybe it’s all those discounts we receive.

A recent USA Today article concluded that older Americans are struggling financially because of the pandemic, noting that 68 million “rely” on Social Security and they received a modest 1.3% cost-of-living adjustment (COLA) because of “paltry inflation.” Who’ll challenge such broad generalizations? Let me start.

Thanks to the pandemic, many retired seniors are saving money because of the inability to travel, dine out and engage in other activities. In addition, many retirees tell me they’ve done quite well with their investments over the past year. And, no, not all 68 million older Americans rely on Social Security. What about that COLA that’s just 1.3% because of paltry inflation? Talk about stating the obvious. Isn’t a COLA supposed to reflect inflation?

The reality is, our view of senior Americans relies on often-repeated assumptions and generalizations. But while those assumptions might apply to 50% of us, they have an outsized influence—because we’ve bamboozled 100% of struggling younger Americans into picking up the discount and subsidy tab for 100% of us old codgers.

Richard Quinn blogs at QuinnsCommentary.com. Before retiring in 2010, he was a compensation and benefits executive. Follow Dick on Twitter @QuinnsComments and check out his earlier articles.

How did you get a discount at the oral surgeon without having insurance?

We have Medicare and Medigap. They just applied the discount when they gave us an estimate.

I guess the approximately half of seniors who have a net worth of around $150K or less feel quite rich. I wonder how many of those seniors on the lower half of net worth have a stock portfolio that has run up like mad. I suspect that a lot of these seniors are helping to pay for SS right now because many have to go back to work.

Oops, I FORGOT ONE In NJ, seniors age 65 can have their property taxes frozen if their income does not exceed $91,505, (indexed for inflation) simply because they are seniors. Several forms of income are excluded from the above amount. Meanwhile the median household income in NJ as of 2019 is $85,751.

That is probably just a feeble scheme to discourage retirees from moving Florida. If your property tax is $15K and your state income tax is $10K , you may very well move anyway.

From an incentive point of view, it would make more sense to offer it to retirees whose income is over $91,505, since those are the ones most likely to be paying huge income and property taxes.

I wish, actually I would rather see the money saved and lower taxes for all citizens.

Shhhhh…. You are trading our secrets for web clicks! 🙂

the thing about seniors that blew my mind was that they have sex. I always assumed they didn’t.

Senior discounts are rare in EU countries. This probably reflects the fact that few seniors in the EU live in poverty while the net worth of lowest 25% of US seniors is $3,000.

The USA Today article you cited noted that inflation is higher than COLA for the goods and services that seniors purchase.

I can find nothing to support the $3,000 figure. 65+ have the highest median and average net worth of any group. I’d like to read the sou4ce of that number.

My mistake. The data I cited are for all households. 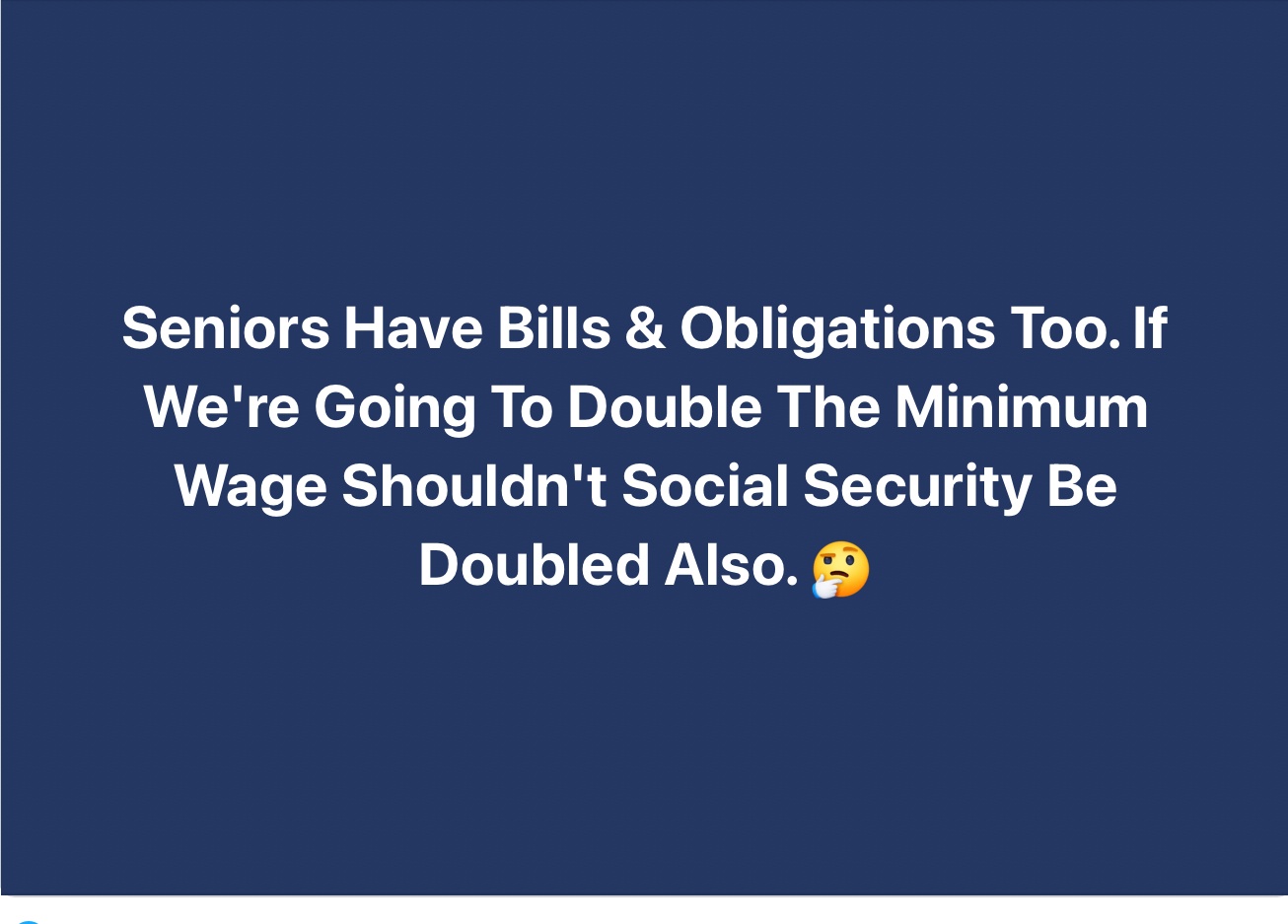 I meme on FB today. The I deserve notion never goes away.

Thank you for making the argument for means-tested Social Security and changes in tax policy. But in the meantime, you could always donate those benefits to charities who actually need them.

I was amazed when I linked this post to a FB retiree group and how much of the feedback was along the lines of … we deserve discounts, we earned them, it’s a right of passage and a sign of respect. Yikes! I don’t get that attitude.

Unfortunately Richard the other side of the coin is terrible. As I am close enough to peer over the edge, it’s coming into sharper focus those who’ve made (or even attempted) a plan for “what’s next”, be it retirement, a second career, or whatever, versus those who have “lived for the moment” for 3 decades of “moments”, ala “YOLO”. I feel fortunate to have enjoyed perhaps a similar course to the one you’re on now, and probably in large part due to a fortunate combination of entering a well-compensated profession and an upbringing that had essentially no focus on accumulating material wealth. But apart from basic financial common sense that writers like you and Jon dispense weekly, my strong advice to our younger readers is to prioritize health. There are a lot of sins that can be remedied in retrospect, but years of poor self care I’ve found to be a challenging pit for people to climb out of.

So true! As a Senior in good health, it breaks my heart hearing about the health problems of my age-mates who are paying the price now for years of poor self care. And others put me to shame with their rigorous routines and super-healthy diets! 🙂

***Our income is higher than that of the typical oral surgeon.***
Well, bless your heart.