MY WIFE AND I recently read The Ant and the Grasshopper, from Aesop’s Fables, to our youngest daughter. If you recall, the grasshopper mocks the ant for spending all his free time amassing food. But when winter comes, the starving grasshopper begs for assistance—and the ant refuses.

Lately, I’ve been struck by the irony of this parable. As we celebrate the role of physicians in keeping us all safe from a virus, that same virus is slowly starving physicians of their salaries. How am I acutely aware of this bizarre conundrum? I’m married to a family physician.

Before you break out the world’s tiniest violin, allow me to paint a picture of what I and others are witnessing across the nation. The economics are startling, even if the personal finance lessons are a well-worn, cautionary tale.

Since this virus’s arrival on our shores, more or less all of us are now under some kind of quarantine, except essential workers. As hospitals have halted their elective procedures to free up bed space and medical equipment, their revenue has taken a massive hit. In addition, many outpatient clinics have closed to prevent the spread of the coronavirus. Our once-booming economy has now ground to a halt—even for the medical field.

Those clinics that remain open have seen a dramatic decline in patients, who are presumably afraid they’ll get the virus by visiting the doctor. I went to my doctor’s office recently. It was a ghost town. It’s usually packed with people, but there were no other patients the entire time I was there. Many offices, including my wife’s, have gone to virtual medicine via video platforms, which has helped alleviate—but not eliminate—the financial burden.

Keep in mind that these same doctors are on standby if or when hospitals become overwhelmed. They will begin seeing patients to relieve the strain on hospital staff. In fact, that exact scenario is playing out in New York right now. Other hospital systems around the country have told their physicians to be prepared to do the same.

As the spouse of a physician, I have a lot of friends and acquaintances in the medical field. I’m seeing firsthand how little emergency savings many physicians have. Some doctors are now turning to locum opportunities, which is a type of moonlighting for physicians, to cover their earnings shortfall.

As Thomas Stanley observed in The Millionaire Next Door, doctors have notoriously high spending habits, including large houses with equally formidable mortgages, fancy cars with liens and kids in expensive private schools. They also typically carry enormous debt incurred from all their schooling and low-paying residency years. Yes, like the rest of us, doctors may have investment accounts. But those savings are needed at precisely the wrong time—when the stock market, and hence their investments, are down significantly.

I believe many physicians are now learning the difference between wealth and income. When you’re heavily in debt and have high living costs, a high income can set you up for poverty, not wealth. Ordinarily, medicine is about as recession-proof an industry as exists. But a microscopic virus has shredded physicians’ sense of financial safety, while also putting their physical safety at risk.

A cruel, added twist of irony: While stimulus checks will help out many Americans, most doctors won’t qualify, because they previously enjoyed salaries in excess of the level required to receive assistance.

The oft-quoted “this too shall pass” applies not just to today’s health and economic crisis generally, but also to the unfortunate position that doctors find themselves in. Patients will return eventually. My hope: Doctors, like all Americans, will learn from this crisis how insidious debt can be—and how important it is to have a robust emergency fund.

John Goodell is a government attorney who has spent much of his career advocating for military and veterans on tax, estate planning and retirement issues. His biggest passion is spending time with his wife and kids. Follow John at HighGroundPlanning.com and on Twitter @HighGroundPlan. His previous articles were Average Is Great and Garbage Time. The opinions expressed here aren’t necessarily those of the U.S. government.

This is a travesty.

Residency programs should have a list of 20 basic finance and investing books to read. Even just to spend a few hours over the 3-5 years covering a summary, and suggesting they be read in free time during or after residency, would do wonders.

The medscape physician NW survey – by age – is below. 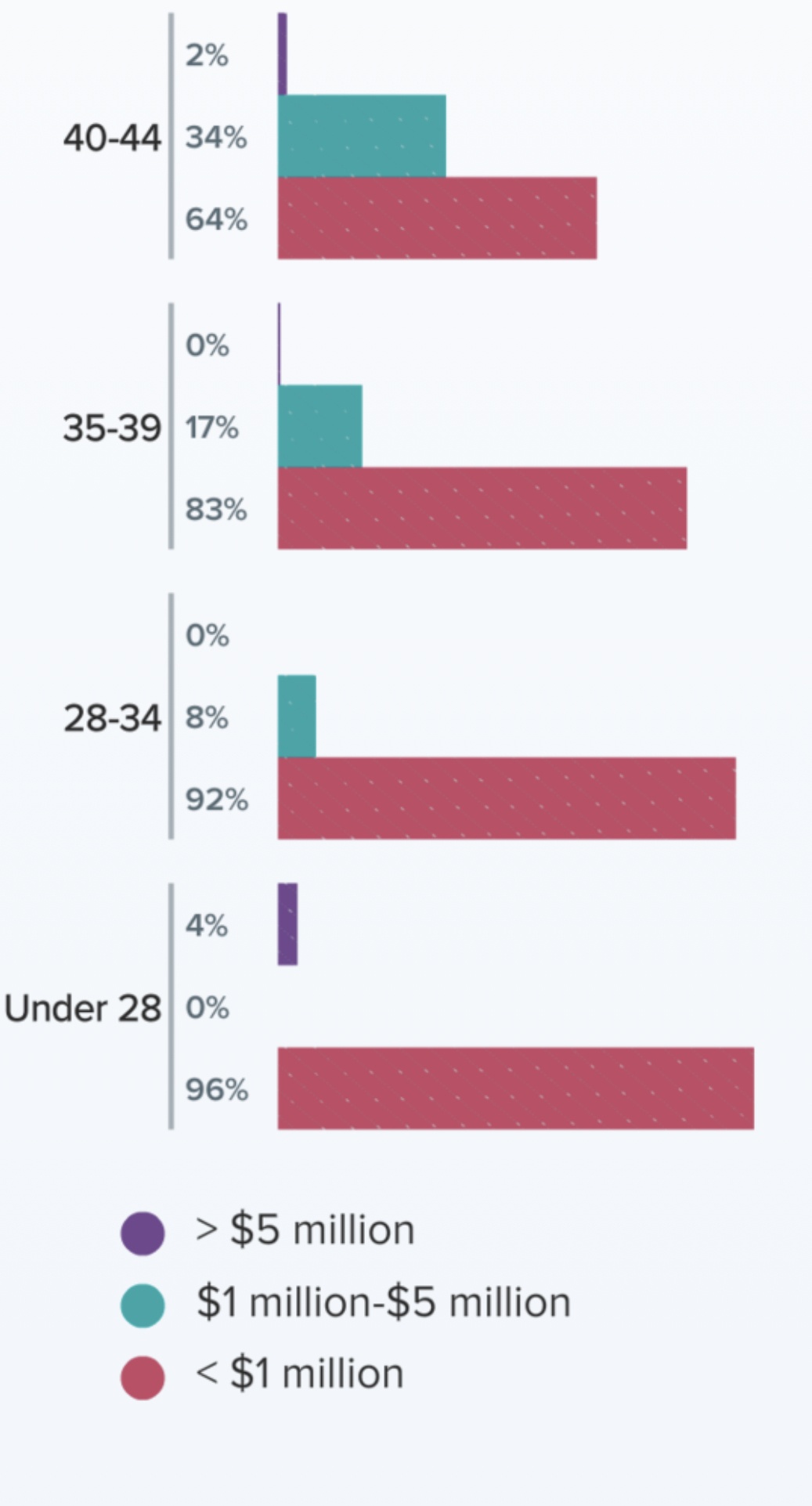 Over the last month I’ve been surprised that two of my doctors—primary care and allergist—have insisted on non-urgent appointments and lab work that required me to go in person to clinics and sit and wait in open waiting rooms. It did cross my mind that income issues may have been driving them.

John this is 100%, and a strong argument for why many high-earning professionals should think strongly about enlisting a financial adviser. A fun adage from my training regarding knowledge has been, “often wrong, never in doubt”. Didn’t work in medicine, doesn’t work in wealth management.

My Dad was an estate tax lawyer and once told me that doctors were his smartest and most foolish clients. His take was they were so focused on their occupations that they didn’t have or make time to study financial issues and were the most likely to be suckered into bad and/or inappropriate purchases and investments. They also tended to be “asset rich and cash poor” which made quite a mess of things when they died or got divorced.

On the recent idling of so many doctors, I think we overreacted to the virus in this way in much of the country. It was necessary, no one knew for sure what was coming, but I hope we can get our doctors back to work soon. My wife got some testing done at a local hospital yesterday that we held off on due to the electable procedure moratorium. We were given a 25% discount! In NW FL we are starting to see the hospitals return to normal.

Excellent article John. My wife is a medical professional, directing the development and operation of ambulatory surgery centers. Our state has prohibited any “non-life sustaining” surgeries. This has hit the centers and their doctors dramatically. They are furloughing nurses and techs. The SBA loans will help some, but not necessarily the physicians. I also have a sister-in-law who works for a national emergent care chain – their census is way down.

There is a tendency to think that people who make a lot of money are financially savvy… but I’ve seen a lot of evidence to the contrary. I don’t believe there is any correlation one way or the other; financial skills are a relatively scarce commodity no matter the income.

The current situation does put many of us to the test, and it’s one I’m not sure I’d pass (yet), so I count myself lucky for now, and hope the efforts we’ve made in the past 5 years get us to where we want to be in the next 5, which is to be able to handle such a crisis without having to derail other plans.